Since I posted The Tale of Tina Peters last week, the situation in Mesa County has kicked into high gear. After revealing that Sheila Reiner, Tina Peters’ predecessor as Mesa County Clerk and Recorder, led the effort to recall Tina Peters in 2020, a source in Mesa County shared a recent social media post from Ms. Reiner from August 3: 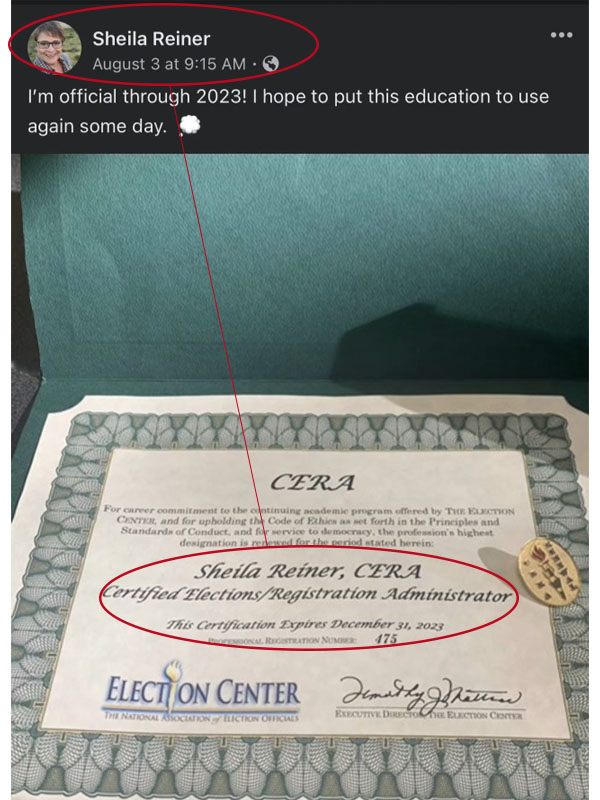 So, that’s interesting, right? On August 3, a week and half before news of the alleged leak of passwords — the passwords to which Tina Peters never had access — hit the news and public discourse, Sheila Reiner was recertifying herself to run elections.

At the time of this post, Reiner was serving as Mesa County Treasurer, a position with absolutely zero responsibility for election oversight. Is the Mesa Treasury so automated and operational that Ms. Reiner had nothing to do and needed to swim into Tina’s lane?

Or, did Reiner have advanced notice that Jonestown Jena Griswold was going to fabricate a crisis (and need a friendly) in order to cover up the negligent leak of passwords from the Secretary of State office? Was Sheila getting certified in advance of JJ’s coup in order to step into the role?

What seems more likely at this point: Coincidence or careful planning?

Oh, oh, oh! And remember the Gateway Pundit article revealing that Matt Crane, Executive Director of the Colorado County Clerks Association, was at a barbecue with Dominion’s Strategy and Security Leader, and alleged Antifa co-conspirator, Eric Coomer? Well, Sheila Reiner was there, too.

Something about “the company you keep” comes to mind here…

In my last piece, we were talking about Sheila and Wayne being appointed. Now that ship has sailed. Late last week, Reiner and Runbeck Senior Advisor Wayne Williams – the second “overseer” who has come into Mesa to clean things up and restore public trust (insert eye roll) – showed up to work and began dismissing Tina’s staff. This week, for example, Wayne and Sheila dismissed Tina’s Deputy Clerk without cause.

We also learned recently that Mesa County, in July 2021, signed a new contract with Runbeck for the county’s balloting needs.

Was Williams involved in this negotiation between Mesa and Runbeck, which occurred a little over a month before he was given a position of power over Mesa County elections? If Mesa County can show definitively that Wayne was not involved directly on the county-side, did Williams collaborate with and advise the Runbeck account and sales teams for Mesa County as part of the negotiations?

These are not unreasonable questions. On Sunday evening, I shared my concerns about the perception of, and unanswered questions about, conflicts of interest relative to Mr. Williams appointment. I wrote:

When you decided to go into public service, you likely thought about moments of statesmanship where you’d face big, important decisions that affect the course of the nation. This is one of those moments.

I spent 16 years of my career with a big four audit firm. Every year, everyone in the company, down to the executive assistants, had to take “Independence Training.” This was four hours and culminated in a big, hard test. If you didn’t pass, you didn’t keep your job.

The content of the test was about conflicts of interest, corruption, perception of impropriety, money laundering, crooked deals, and any other possible conflict of interest of perception of such. The purpose of the affirmation / attestation of independence was public trust: Those entrusted with the financial audit and attestation could not even have the appearance of corruption. Corruption corrupts the whole thing and once public trust is broken, you’re in dangerous territory.

As I said, I took this four-hour, interactive training every year for 16 years. The precepts and principles stuck. And that’s why I find it so appalling that you’re considering rubber stamping Wayne Williams, who has multiple conflicts of interest and should not be anywhere near our election systems, to stand in for Tina Peters. Tina has not been recalled by the People.

You cannot allow the Secretary of State to appoint or approve an elected official who has not been recalled by the people. Tina Peters stands accused by the person she is whistle blowing against. Wayne Williams has multiple conflicts of interest including his current position with Runbeck, his former relationship with Dominion, and his eagerness to condemn Tina Peters publicly, without an understanding of the facts. Sheila Reiner re-certified herself as an election professional one week before Jena made her move on Mesa and announced Ms. Reiner as Tina’s replacement.

Even if you just do a quick glance at the perceptions of conflict of interest surrounding the players involved, you should get sick to your stomach. Rubber stamping this disaster is not in the best interest of public trust.

A fair, independent investigation will determine what is really going on in Mesa County local government, but until then, you have a duty to the people of Mesa County to isolate the clerk’s office from those with credible allegations of fraud and corruption, or even the appearance of such. You’re The People’s last hope, the very last thread holding onto public trust.

Stand with your constituents against the Polis Administration’s blatant overreach into Mesa County.

Remember your oath. Avoid even the perception of compromising it. And tell Wayne Williams to get far, far away from Mesa County elections.

That Independence Training was legit, and anyone who worked for an audit firm in the Sarbanes-Oxley / 404 years can back me up. And like I said,

Public trust is obviously not a consideration for the Mesa County Commissioners.

Over the weekend, Colorado residents flooded the Mesa County Commissioners with emails, phone calls, and statements demanding that they remove these establishment plants from their elections. On Monday morning, the Commissioners held a meeting to discuss what to do about this dumpster fire and, while no decisions were made, the Commissioners set another “Special Meeting” for Tuesday at 1pm MT to continue the discussion.

At least that is what they told their constituents. The agenda for this session has now been provided online, and there is only one real agenda item on the docket:

You read that right! The Mesa County Commissioners are set to sign a new contract with Dominion on Tuesday, August 24, 2021, enslaving the People of Mesa County through voter fraud-inducing machines until the end of the decade. The agenda item reads:

Approve a First Amendment to and Extension of the Voting System and Managed Service Agreement by and between Dominion Voting Systems, Inc. and Mesa County to replace all equipment decertified by the Secretary of State of Colorado on August 17, 2021, at no charge to Mesa County, extending the Managed Service Agreement through 2029 at a cost of $96,153.00 for year 2022 with a 2% annual increase therein, and adding the Dominion Ballot Audit Review (BAR) module add-on where voters can see all ballot images at a per service cost of $3,300.00, and authorize the Chair to sign.

So, this was a negotiation. I imagine it going something like this:

Dominion: “Hey guys!  What a super bummer that JJ decertified your machines. We will replace them at no cost for you. We are going to need to do a change order though. So let’s do this. We will replace the machines and then you guys can give us, say, two percent more on the managed service side.”

The Managed Service agreement is the part where Mesa County election management is (allegedly) outsourced to Dominion, a for-profit (read: for sale to the highest bidder), third-party vendor.

Mesa: “Oh wow! You’ll replace them for free! And we only need to give $100K per year to run our elections and mess with the machines and secure democracy because you’re so super trustworthy! Wow, what a deal — where do we sign?”

Dominion: “Let’s also add in a new module that allows your constituents to see the ballot images! You can point them to the ballot images and avoid having anyone look at the paper, and distract them from attempting to validate the electronic record with the physical one. That sure will save you all a bunch of headaches! How does $3,300 per service sound?”

Mesa: “Gee, we hate dealing with our constituents! We can outsource that to you, too? You’re like the Walmart of elections! This is great — we will set a special meeting for Tuesday to get this ball rolling!”

Note: This discussion is a fictional representation of the very real level of competence with which our elected officials engage in negotiations with corporations.

JJ originally said that Mesa County (taxpayers) needed to buy new equipment or engage in a hand count for their upcoming elections. The People of Mesa County have been very clear that they prefer the hand count, holding rallies, making phone calls, and writing emails and letters to their government without ceasing to make their position crystal clear. The People have been consistent on this point since JJ first landed her broomstick in Mesa and deployed the flying monkeys onto Tina’s office.

Yet, despite all these efforts by The People, the Commissioners set this meeting yesterday (Monday), for today (Tuesday), to extend Dominion through the end of the decade. In the middle of everything surrounding Mesa County elections…

Did Sheila Reiner call her BBQ buddy Eric Coomer to get this contract going? What was Wayne Williams’ role, given that we know how much he loves Dominion? Remember this is the former SOS who mandated the use of Dominion in Colorado until Douglas and Garfield counties successfully sued to get out of it.

The coup of Mesa County — and therefore, the Western Slope of Colorado — is nearly complete.

Lawless doesn’t even begin to describe this situation. Jena Griswold and the Colorado Election Establishment Cabal appear to be using a “shock and awe” strategy, moving quickly with big allegations and claiming authority they don’t have to get what they want. And they are getting what they want.

But according to the actions of the Mesa County Commissioners, the People of Mesa County just need to bend over and take it.

Want to do something? Today (August 24) at 1pm there is public testimony.  Email and call…It’s pitiful how the Mesa Kommissars are caving to the Dominion cabal!

6 thoughts on “the colorado coup is nearly complete, and dominion is right in the middle of it (yes, really)”